Due to being quite literally all over the place (currently in Surrey at in-laws), not much sit down learning has taken place recently. Though having said that, at 3 I don’t think that is necessarily age appropriate or a concern for us anyway. But here are a few bits and pieces that we have been up to that have inspired conversations, informal learning and fun.

It was briefly warm enough for some trips to the park with me wearing no coat! We observed the snowdrops and crocuses and talked about how snowdrops are the first flowers to show themselves after the long winter and that they are a sign of the approaching spring. In fact, the ongoing conversations we’ve had have inspired me to find a good pocket guide to flowers and fauna so any recommendations are very welcome!

The next day was similarly warm and we went to the beach with one of my oldest friends. We had a lovely time even though Sophia tripped whilst throwing stones in the sea and ended up face down in the shallows! 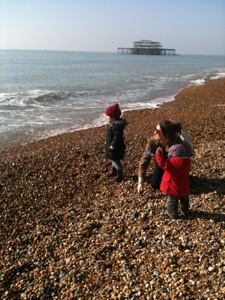 The next day saw us shooting off to Surrey for a few days with my in laws before the final journey to Devon.

Sophia has been doing some painting and drawing here and has amazed me with her pencil control whilst writing words and asking how to spell certain words. It’s funny how even though I thought we hadn’t been doing much over the last few weeks she’s still been picking up and absorbing information and come along leaps and bounds. Such an amazing process to watch!

Grandad then managed to get a day off work and we had a day out which was lovely; it was freezing so we took the kids to soft play and then went to see the war machine from War of the Worlds in Woking. We had started the day with Grandad telling Sophia about War of the the Worlds and listening to some of the music so she spoke a lot about Martians and stories and orange skies all day! We had hoped to pop by Horsall Common on the way home to see where they landed but kids were too tired in the end.

Dan then joined us for the weekend and after an indoor picnic we went to the Look Out in Bracknell Forest with Grandad and Uncle Ed. We spent most of our time there in their science/observatory rooms which house lots of hands on discovery and experiment stations. Sophia and Isaac enjoyed themselves, I think Sophia liked the giant Lego bricks and supermarket the best and Isaac loved the light and colour room! I’d definitely recommend going if you’re in the area. And the view from the top of the tower was amazing!

So we’re off to my parents in Dartmouth tomorrow and then next Saturday we finally move into our new house in Topsham! It’s been a long transitory period and is starting to take it’s toll on us all but the kids for the most part have been amazing and we’re just excited about our new adventure!

In all my life I never went to hospital except to give birth but since having kids I swear it’s becoming a regular occurrence! We’ve been to A+E four times with Sophia (bumped head, drank guitar cleaner, broke finger, possible concussion), one of which resulted in minor day surgery (the finger!) and had an ambulance called for Isaac after the out of hours doctor was concerned by a very high temperature and slight issues with breathing (he didn’t have to go in and was fine).

But today as I type I’m sat waiting to be called to recovery as Isaac is having a tongue tie release which has to be done under general anaesthetic due to his age. I know he’ll be fine but I can’t help feeling nervous and having…
**later**
…I got called to recovery in the middle of typing! I was feeling nervous as holding your child whilst someone uses gas to put them to sleep is pretty unpleasant. I got a bit teary but am told this is normal!

Anyway, he was fine, it all went well and he seems delighted with the new movement of his tongue, has been waggling it all over the place. In fact, the worst bit was the fast before-he was fitful and crying from 2am until 7am as he wasn’t allowed breast milk-not fun!!

I’d like to say I have some deeper insight in relation to this morning but unfortunately I don’t, I was just blogging to relieve anxiety. The only comment I really have is that I wish it had been caught sooner.

I’m a breastfeeding peer supporter so feel quite embarrassed that I didn’t realise until he was 9 months old but really I think I was too proud and dismissive of the problems we did have.

I had an attitude of ‘there’s no normal feeding pattern’ and ‘every baby is different’ and whilst that may be true to a certain extent, I definitely should have had a slice of humble pie and gone to see someone much earlier when he continued his excessively frequent feeds, slipping off the breast, dissatisfied crying in the evenings and refusal of my inverted side.

So my only take home advice is that if you have even an inkling that there may be something not quite right or if feeding isn’t comfortable for you or your baby, even if it’s your 7th baby, suck it up and go find some support!!

I found this article just the kick I needed to go and see a doctor about it (his weight gain was so good I didn’t think it could be tongue tie at first) so would recommend reading it if at all concerned.

The look on his face when he had some food afterwards and realised he could manipulate it in his mouth in a way he never could before was just priceless, what a smile!

And just a quick aside to end, staff at the Royal Alexandra Children’s Hospital (Brighton) were amazing, as always. Props to them and thanks!

Exploring before his trip to theatre

Yup, that’s what it feels like. A state of inertia where nothing is really happening.

Our worldly possessions are stacked (as a result of some Tetris like packing) in the back of our van and we’re 2 weeks into our 6 weeks of sofa surfing before we move into a new home.

I realise that that all sounds a bit negative but it’s not meant to! Quite the opposite! We’ve had a really pleasant few weeks, caring for a friends lovely home and now staying with Jo, Matt and their girls (we’ll be here for another two before heading to see grandparents).

The big girls have got on remarkably well and are being very sweet considering they’ve been together 24/7 and that Sophia is being rather over sensitive from all the upheaval. In fact, the only things they’ve really bickered about is who gets to be doctor when playing with their doctors kits and who gets the pink coaster at meal times! It’s been a glance into communal living; parenting has been easier as Jo and I have been able to tag in and out-it takes a village to raise a child indeed and in this modern day and age we might need to have a slightly different village set up but this week has shown what a difference having other adults around on a very frequent basis can have.

In fact, we’re enjoying the set up so much I suspect it is going to make it hard to leave (although I imagine Jo and family might be quite happy to reclaim their second bedroom-they really have been very kind to let us stay)!

But we are heading to Devon this week to house hunt which is very exciting! Me and Sophia are in agreement on wanting a nice garden so we’ll see what we can find.

I feel really at peace with the move so am starting to get excited despite the sadness of leaving dear friends. I’m really looking forward to being able to see Mum and Dad regularly-it’s gonna be awesome!

On a home ed note, I’ve been trying to keep up with our letter-a-week but missed this week, no worries though-we’re in no rush. The girls have played lots of board games, read what feels like hundreds of books, made pizza and blackberry crumble, gone to the library and dance class, played with play dough and done lots of reading eggs – a fairly productive week I think!

The babies have been both cute and tiresome, standard for babies I think and Isaac has just taken off since hitting dry land, walking all round the place and even attempting a run! He’s even sitting still enough for a story or two which is awesome-I love this age, they’re just so darned cute!

But I’m aware I’m rambling so I shall bid you adieu and leave you with two pictures of cute small men (though one much smaller than the other)!